There are some traditions of Hayagriva that characterize the deity as having four faces and eight arms. In these cases the green horse head on the top of the central face is counted as a fourth face.

[74 Bari Gyatsa] Shri Hayagriva.
'Shri Hayagriva, [with] a body red in colour, three faces and eight hands. The main face is red and smiling, the right blue with the tongue curled and the left white, biting the lower lip with the eye-teeth. Each face has three eyes. The four right [hands] hold, a vajra, stick, blossoming lotus and an arrow. The four left, a wrathful [gesture], the left breast, a lotus and bow. With yellow hair bristling upwards, ornaments of snake and a lower garment of tiger skin. Standing in a manner with the left leg extended.' (Konchog Lhundrub edited version). 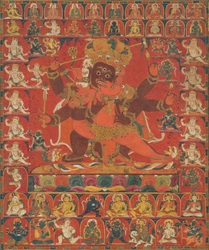 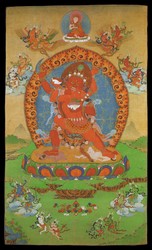