The peacock is a bird from the pheasant family and is also known as a peafowl. The male is called a peacock and the female is a peahen.

Decoration:
On certain temple rooftops, two peacocks are often depicted placed on either side of a vase and jewel cone-like structure (Tibetan: ser tog). The peacocks are known for eating poison and from a transformation of that it is also believed that the iridescent colours of their feathers are manifested. The peacocks together represent the transformation of the three worldly poisons into wisdom and the vase and jewel symbol represents the four initiations contained within a major Vajrayana Buddhist empowerment. Where the wheel and two deer are famous for representing Buddhism, the vase and two peacock represent Vajrayana Buddhism. Oral history suggests that it was Chogyal Pagpa (1235-1280) who designed the peacock symbol for the completion of Lhakang Chenmo monastery.

Seated on a Throne or Mount:
Amitabha Buddha sits on a peacock supported throne. Some examples of Amitayus Buddha also depict him on a peacock throne. The son of the god Shiva, Kartikkeya, rides atop a peacock as do some forms of the Buddhist deity Manjushri.

Attired or Holding Peacock Feathers:
Mahamayuri is known as the peacock goddess and is generally included in the group known as the Five Pancha Raksha Goddesses. She has many different appearance and sometimes holds peacock feathers and in other descriptions she is wearing peacock feathers.

[Bari Gyatsa #5] Manjuvajra.
"Above a peacock throne is a red lotus with four petals. In the middle and at each of the four directions are moon discs. In the middle is Manjuvajra. In the four directions beginning in the east are Moha Kumari, Mag Kumari, Irshya Kumari and Kula Kumari. [All] have bodies red in colour and hold a vajra and bell. In the same manner as before, with ornaments, garments and seated." (Konchog Lhundrub).

[Bari Gyatsa #50] Arya Janguli
"Arya Janguli, yellow, with three faces. Having a hood of seven snake heads. [Each face] possessing three eyes and the faces [both] smiling and fierce. The six right hands hold, a vajra, sword and an arrow in a dancing manner. The left, a wrathful [gesture] together with a lasso, a blue poisonous flower and a bow. Adorned with flowers and snakes. Standing in a dancing manner. (Konchog Lhundrub).

In the Bon religion the principal female protector deity Sipai Gyalmo has two forms that are often attried in gowns of peacock feathers: Yeshe Walmo and Sipai Gyalmo riding a bird.

Shavaripa is the only famous siddha to be associated with peacocks and feathers. He wears a lower garment of feathers and is very distinctive among all the different depictions of the Eighty-four Mahasiddhas because of this manner of attire, along with his bow and arrow. Shavaripa is loosely related to the deities Parnashavari and Janguli by both similarity of name, tribe, and the peacock feathers. 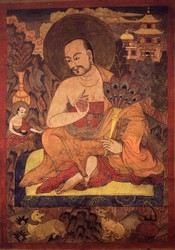 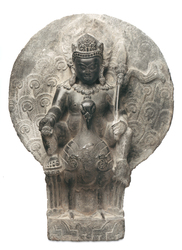 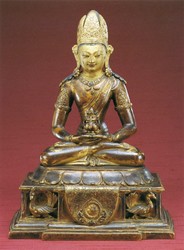 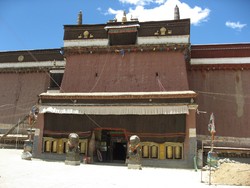 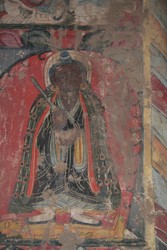 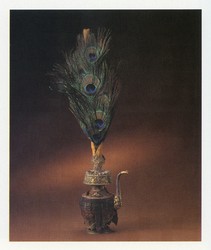 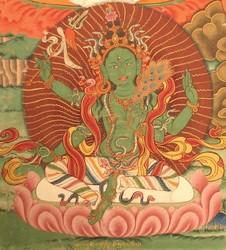 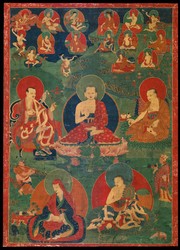 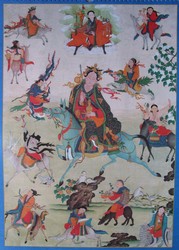 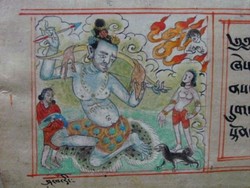 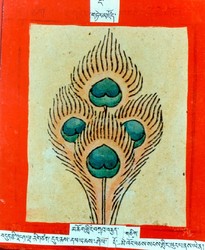 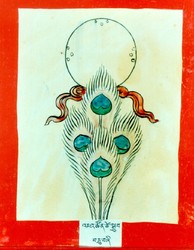