Vajradhara Buddha and Samantabhadra Buddha have the same basic function but belong to two different Buddhist systems within the Vajrayana Buddhist Tradition. Vajradhara belongs to the Sarma tradition and Samantabhadra belongs to the Nyingma tradition. The two are only physically similar in that both are typically blue in colour with a single face and two hands. Vajradhara has the two arms crossed at the heart holding a vajra and bell. Samantabhadra has the two hands in the lap in a meditation gesture. Both are seated in Vajra posture. Sometimes they appear embracing a consort. The significant difference in appearance is Vajradhara is wearing heavenly garments and jewelry while Samantabhadra is naked with no garments and no jewelry. A explanation for this difference is that Vajradhara is in Sambhogakaya appearance (enjoyment body) of a buddha while Samantabhadra is in Dharmakaya appearance (truth body) of a buddha. This type of explanation is abstract and the meanings of the four different types of a buddha's esoteric body need to be known. 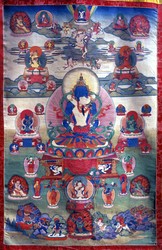 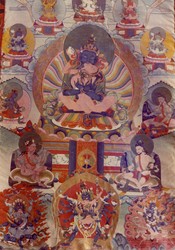 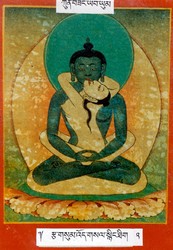