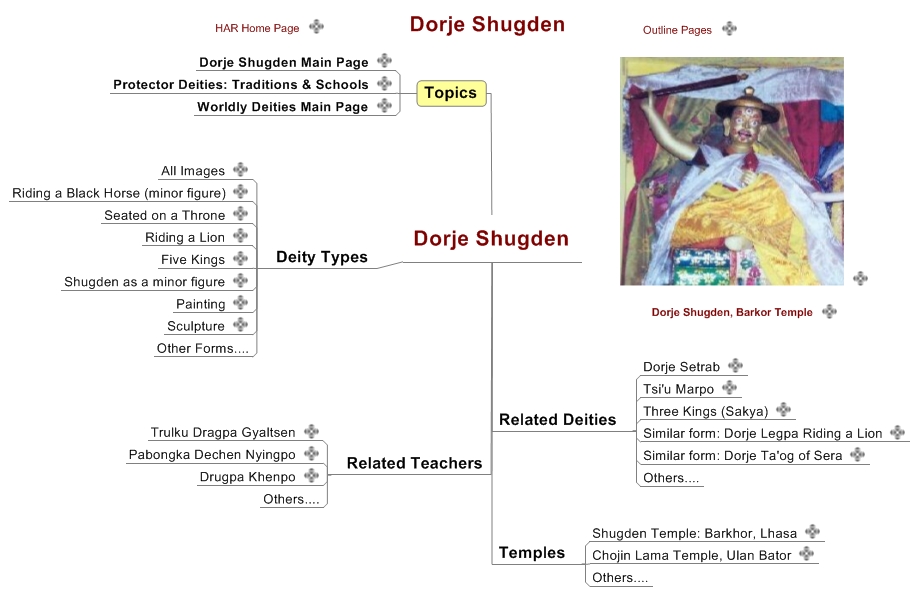 Dorje Shugden is generally believed to be a worldly protector deity that was likely practiced first in the Sakya Tradition of Tibetan Buddhism. According to some accounts he was inducted into the pantheon of Sakya protectors by Sakya Trizin Sonam Rinchen (1705-1741). Later, placed together with the two protector deities Dorje Setrab and Tsi'u Marpo they were collectively known as the Three Kings (Gyalpo Sum). In the Sakya texts Shugden is known as Dorje Shugden Tanag, or rather Dorje Shugden Riding a Black Horse. He holds a butcher's stick upraised in the right hand and a heart in the left lifted up to the mouth. Dressed in the robes of a monastic and wearing a gold lacquer riding hat, he sits atop a black horse. In the early 20th century Dorje Shugden Tanag fell out of favour with the Sakya Tradition in general. His devotees and practices have subsequently diminished. Since the late 20th century the offering rituals for the Three Kings are no longer found in the standard daily use Sakya Protectors manuals in monasteries in India or Tibet.

Sakya depictions of Dorje Shugden Tanag in paintings can be dated to circa 1800 (see examples). Although so far no sculpture have appeared nor are there any paintings with Shugden Tanag as the principal central figure. In all there are approximately half a dozen Sakya paintings known that have Shugden Tanag as a minor figure in the composition, a number of these are from the first half of the 20th century - research is ongoing.

Liturgical formulas and religious texts for presenting offerings to Dorje Shugden were created in the Sakya, Gelug, and Drugpa Kagyu Traditions of Tibetan Buddhism. The Drugpa Kagyu texts are from Bhutan.  (No Drugpa Kagyu paintings have so far come to light). It is possible that other traditions aside from these three mentioned also propitiated the worldly deity and created visual depictions. The Sakyas have several short liturgical works all written approximately 200 years ago or more, whereas in the last century the Gelugpas have feverishly written enough new material to fill two standard size Tibetan volumes. This collection of works is called in short the Dorje Shugden Be'u Bum. The collection also includes those early Sakya writings.

In these less than harmonious times, with reference to the study of Dorje Shugden, the academic world is not so inclined to search out and study these and other historically interesting Dorje Shugden texts.

In the Gelug Tradition evidence suggests, textual and visual, that the practice of Dorje Shugden became popular in the early 20th century and very prominent by the mid century. The popularity was also carried forth by such great teachers of the time as Pabongka Dechen Nyingpo and others. However, since very recent times, specifically the 1970s and a frenzied exchange of Tibetan language publications on the topic of Dorje Shugden, there are now two groups of Gelug followers that espouse two different views on the nature of Dorje Shugden. There are those who follow the Dalai Lama and have put the practice of Dorje Shugden aside believing that it is nothing more than the worship of a ghost or spirit (preta) and potentially harmful in the end. A second group of Gelug followers believe that Dorje Shugden is in fact a Wisdom Deity of the highest level and none other than Manjushri himself emanating in various forms through the last millennium - appearing now as Dorje Shugden - protector of the true faith.

The two Gelugpa groups remain unreconciled over the issue of Dorje Shugden.

2. Seated on a Throne

In the Gelug protector pantheon the main form of Dorje Shugden holds a wavy long edged sword up to the sky in the right hand and a heart in the left. A mongoose sits perched at the bend of the left elbow and an upright katvanga staff leans against the left shoulder. He typically rides a lion, depicted as a Tibetan snow lion, although a number of texts state that he can ride any number of mounts. An alternate form of the deity has him holding a butcher's stick aloft with the right hand and a heart in the left, seated on a cushioned throne with one leg pendant. A variation of both these two appearances is the addition of four accompanying forms of Dorje Shugden creating a total of five prominent figures known as the Five Kings. (As an aside, the traditional Gelug depiction of Dorje Shugden is very close in appearance with the Nyingma protector Dorje Legpa).

The two earliest known depictions of the Gelug iconography of Dorje Shugden are those presented above. The sculpture, whether it is the original or not, was created in the early years of the 1900s to decorate the Chojin Lama Temple in Ulan Bator, Mongolia - where it can be found today. The painting, in the collection of the Field Museum of Chicago, was collected in Eastern Tibet or China by Field Museum anthropologist Berthold Laufer between 1908 and 1909. Early visual examples of a Gelug depiction of Dorje Shugden prior to the 1900s are rare at best. What is even more curious is a lack of any Dorje Shugden image depicted among the protectors in the many good and early examples of Gelug Refuge Field Paintings - Refuge Field paintings being a Gelugpa invention of the 17th and 18th century. The HAR website has over 60 specifically Gelug examples of these Refuge Field paintings from collections throughout the world - research is on going. (See a small selection of source texts).