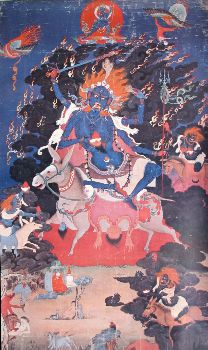 Shri Devi is the most important classification of female protector deity in Tantric Tibetan Buddhism. Out of the nearly two dozen textual forms of the goddess there are three principal forms that appear regularly in painting and sculpture. The first and second forms are almost identical. Only the hand attributes distinguish them one from the other. Known as Shri Devi Dudsolma, she has one face and four arms. There is a [1] Sakya version of Dudsolma and a [2] Kagyu version of Dudsolma. The Sakya version holds a sword, skullcup, spear and trident. The Kagyu version holds a sword, skullcup, peg 'kila' and trident. The [3] third form of Shri Devi, most popular in the Gelug Tradition, is known as Magzor Gyalmo and has one face like the previous forms but only two hands. She holds a vajra tipped staff and a skullcup.

Some Tibetan teachers say that there are twenty-one forms of Palden Lhamo (Shri Devi), often including the Bon religious protector Sipai Gyalmo as one of the forms. This is likely a late conflation occurring in the last one hundred years or so, an attempt to organize all of the different forms, along with the major and minor traditions, into a single structured system.

Not all forms of Shri Devi have the same entity or personality. The principal form of the protector, Dudsolma or Dudmo Remati, appearing with one face and four arms, riding a donkey, is a wrathful manifestation of Shri Lakshmi (Pal Lhamo). Principal here means earliest and having the most lineages from India, teachings and commentaries associated with her practice. Magzor Gyalmo with two arms, riding a mule, is a manifestation of Sarasvati. The deity Palden Lhamo Ochen Barma is the protector aspect of Vajra Vetali and the peaceful goddess Sarasvati - all associated with the Vajrabhairava cycle of practice. In the Bon Religion Sipai Gyalmo is the wrathful form of Satrig Ersang, one of the four principal deities/gods of the Bon Religion. This shows that the different forms of Shri Devi arise from various narratives, ritual and practice traditions.

The form of Shri Devi known as Magzor Gyalmo, with two arms and riding a mule, has a different history derived from different source literature. In the main text narrating the history of Magzorma, the Dakinyagnijihajvala Tantra, she is described as the servant, or younger sister, of Shri Devi Dudsolma (with four arms and riding a donkey). See the Magzor Gyalmo Introduction and the source literature the Dakinyagnijihajvala Tantra, Dege Kanjur, volume 98, pp.223-253. It is found in the Nyingma Tantra section, vol.3.

Dorje Rabtenma, the special protector of Shalu Monastery in Tsang Province, Tibet, is also a form of Shri Devi: "...Goddess Dorje Rabtenma, Great One, with a body maroon in colour, one face, two hands and three eyes; the body covered by a human skin. Held in the right hand is a blazing sword, a mongoose grasped in the left, riding atop a three-legged mule." (Shalu Liturgical verse by Shakya Gelong Rinchen Namgyal).

The image of Shri Devi Dudsolma pictured above is taken from a photograph of a paper poster acquired in 1973. The poster is believed to have been made in India in the late 1960s or early 70s. There is no information on the poster at all, front or back, no writing and no numbers. If anybody has seen another image like this or knows where this original painting resides then please send an e-mail to us at info@himalayanart.org. Thank you.