This set of Margapala/Lamdre Lineage figures is primarily derived from the modern collections of the Guimet Museum in Paris and the Ford Collection of Baltimore. The Guimet has several paintings from the set. Each central figure is painted with gold and a smaller secondary figure is depicted in the upper left or right corner of the composition. The landscape is natural, predominantly green in colour with the earth tones following the Yongle blue and green with added brown colour typical of the Khyenri 'peaceful' style of painting. Some cloud elements appear borrowed from the New Menri painting style which gained popularity towards the end of the 17th century. It is not known how many compositions would have been in the complete painting set. So far, the most recent of the teachers in a chronological line is Jamyang Sherab Gyatso, Ngor Khenchen 3 (1396? - 1474 [P1569]). This painting does not appear to be the final in the set.

A Revolutionary Artist of Tibet: Khyentse Chenmo of Gongkar. David P. Jackson. Rubin Museum of Art, 2016. Pages 174-178. (Jackson dates the set of paintings to last half of the 15th century). 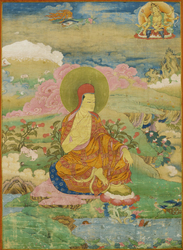 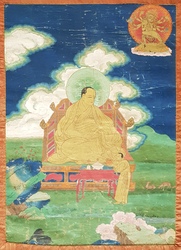 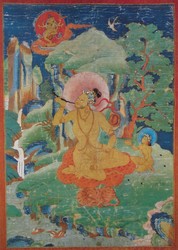 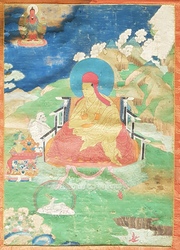 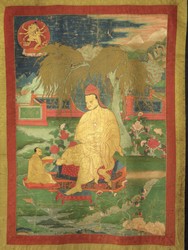 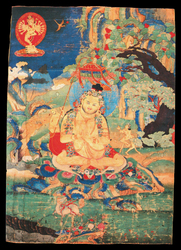 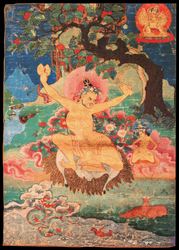 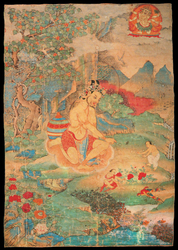 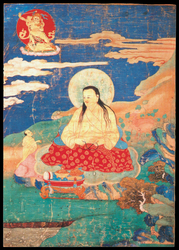 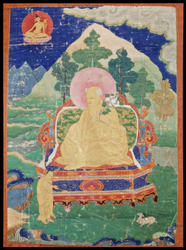 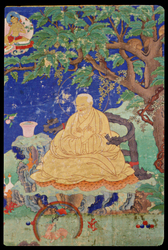