This list of religious traditions, sub-schools and lineages below is intended to identify the traditional leadership structure of each down to the present time. The title of the leader along with the name has been added where possible. Following that is the relevance of the traditional hierarchy and lineage and how it is represented in the art of the Himalayas and Tibet.

A School of Tibetan Buddhism generally means that it began with a central administration forming around a founding teacher or the immediate students of a founding teacher. Soon after the founding of the Nyingma it branched into several different administrations along with a large number of individual lineages of philosophical and Tantric teachings. The Nyingma is the best example of a Tradition that has no single central administration but rather numerous individual family traditions or monastic institutions - each unique and self-governed.

The Sakya is also not a single tradition based on administration, however it remains a single tradition based on common doctrine. The Sakya Tradition proper only has administrative rights over Sakya proper. The Ngor, Tsar, Dzongpa, Shalu and Gyantse Traditions have independent authority and administration. The Jonangpa Tradition which Jamyang Khyentse Chokyi Lodro describes as a sub-school of Sakya has always had independent authority despite being related so doctrinally close with the Sakya Tradition.

In Tibet there were always two different and unrelated Kagyu Traditions during the beginning of the 'New Tantra' (sarma) period, Marpa Kagyu and Shangpa Kagyu. Both were distinct and independent. For the traditions descending from the Marpa and soon to follow Dagpo Kagyu, such as Drugpa, Karma Kamtsang, Taglung and Drigung, each have independent administration. With the Drugpa Kagyu there is also independent authority between the Tibet branch and the Bhutan branch of the tradition. Therefore it cannot be said that any one branch descending from the Dagpo Kagyu, such as Drugpa, Karma Kamtsang, etc., has any authority over any other branch. There has been no single authority over the various branches of the Dagpo Kagyu Tradition since the passing of Gampopa Sonam Rinchen in 1153. The Shangpa Kagyu of Khedrub Khyungpo Naljor was primarily absorbed into the Sakya, Jonang and Gelug traditions.

In the last few centuries the Drugpa Kagyu created an easy formula for characterizing the traditions that descended from Gampopa (Dagpo Kagyu) - the branches are referred to as the Four Great Traditions and the Four Lesser (or minor) Traditions. Most of these traditions are no longer extant.

(It is possible that half of all Himalayan and Tibetan painting is devoted to lineage teachers, lineage sets of paintings and prominent teachers. Aside from the luxury of inscriptions or clear historical iconography it is very difficult to identify individual teachers without the knowledge of traditions and lineages).

Cho & Zhije: these two traditions did not survive as independent schools. The teachings, doctrines and lineages were absorbed into other larger traditions principally the Kagyu, Nyingma and Gelug.

Paintings and sculpture of the two founders are common place along with the Krodha Kali form of Vajrayogini. Typically paintings are single compositions with a central figure of one of the two founding teachers accompanied by lineage figures and deities. Life story paintings for Machig Labdron have also been identified. Guruyoga practices have also been established in some Nyingma and Kagyu traditions - adding to the number of depictions for the two founders.

Drigung Kagyu (Dagpo Kagyu) - since the 17th century there have been two incarnate teachers that are recognized as the leaders of the Drigung Tradition. They are Kyabgon Chetsang (born 1946) and Kyabgon Chungtsang (born 1942).

Early painting and sculpture of the Drigung representing the founding teachers have been identified with portraiture as the strength of the art.

There is an abundance of Drugpa Kagyu art primarily paintings. Much of the art is very late and created after the 17th century.

Bhutan has an enormous wealth of painting sculpture and murals. A relatively small number of paintings and sculpture are found in museum and private collections outside of Bhutan.

The Gongkar Chode Monastery is rich with original murals from the founding of the monastery. A small number of paintings have been identified in museum and private collections. The subjects of the paintings are primarily religious teachers and meditational deities.

There is a very large number of Gelug paintings and sculpture. The founder Tsongkapa is the most popular subject along with the lineages of the Madhyamaka and Yogachara. Following this are the incarnation lineages of the Dalai and Panchen Lamas. Images of the Ganden Tripa lineage are relatively rare.

Many murals can still be seen at Tagten Puntsog Ling monastery founded by Taranata in the early 17th century. Portable painting and sculpture from central Tibet prior to the 17th century is rare. However, after the 17th century in the Eastern Tibetan region of Amdo Ngaba incarnation lineage paintings of Jonang Taranata become more common.

Kadam - the Kadam tradition did not survive as an independent school. The teachings, doctrines and lineages were absorbed into other larger traditions principally the Sakya, Kagyu, Jonang and Gelug Traditions. The Gelug place a special emphasis on the early Kadam Tradition.

A number of examples of early Kadampa art have been identified with an emphasis on the deity Avalokiteshvara and lama portraits.

Kagyu: in Tibet there are two traditions that commonly use the name 'Kagyu.' The Marpa Kagyu and the Shangpa Kagyu. These are unrelated traditions aside from both belonging to the Sarma 'new' traditions from India after the 11th century. The Marpa Kagyu branched into a number of different traditions of which four are still extant with the Drugpa Kagyu being the largest of the four followed by the Karma Kamtsang. The Karma Kamtsang can also be said to have two noteworthy sub-schools which are the Nedo and Surmang. The Shangpa Kagyu founded by Kedrub Khyungpo Naljor has been absorbed into the dominant 'Sarma' traditions of Sakya, Jonang, Drugpa Kagyu, Karma Kagyu and Gelug. Jamgon Kongtrul was a modern promoter of the Shangpa Kagyu within the Karma Kagyu Tradition.

Kagyu, Marpa - did not survive as an independent school. The Marpa Kagyu tradition branched into numerous traditions principally the Ngog and the Dagpo Kagyu. The teachings, doctrines and lineages are primarily preserved by the Drugpa, Karma Kamtsang, Taglung and Drigung Kagyu Traditions. The Drugpa is the largest of the four remaining schools.

Very little if any art has survived from the time of Marpa. There are however a number of paintings that can possibly be linked to the Ngog Choku Dorje lineage descending from Marpa.

A large amount of painting and sculpture can be identified as belonging to the Karma Kamtsang. The principal subjects are lineage paintings and the various incarnations of Karmapa.

A number of paintings have been identified as portraying Gyurme Dorje the founder of Mindrolling. Aside from the founder the art principally depicts the special meditational deities and protectors of the tradition.

The Ngor tradition has created a large number of art works that are spread throughout museum and private collections worldwide. The principal subjects are the Lamdre Lineage descending through the Ngor line of monastic abbots.

Nyingma - there is no traditional head of the Nyingma Tradition. In recent centuries there are said to be Six Main Monasteries along with dozens and dozens of independent lineages of teachings, both Kama and Terma. The six monasteries are: Katog Dorje Den (founded 1159), Tubten Dorje Drag (1632), Palyul Namgyal Jangchub Ling (1665), Urgyan Mindroling (1676), Dzogchen Urgyan Samten Choling (1685) and Shechen Tennyi Dargye Ling (1735).

From these six monasteries the majority of Nyingma art has been identified with the monasteries of Mindrolling and Shechen.

Rwa-lug: did not survive as an independent school. The teachings, doctrines and lineages were absorbed into other larger traditions principally the Sakya, Kagyu, Jonang and Gelug Traditions.

There is very little if any art that can be conclusively said to have belonged to the Rwa Tradition.

Sakya - Sakya Tridzin (Throne Holder of Sakya), member of the hereditary Khon family. In the late 18th century the Khon family divided into two branches, the Drolma and the Phuntsog. Up to the present time the two families have alternated leadership of the Sakya Tradition.

A very large amount of Sakya art has been preserved. The primary subject of much of the art are the lineage teachers of the Lamdre and Vajrayogini Traditions. Important secondary subjects are meditational deities and protectors.

A small number of painted works have been identified as belonging to the Shalu/Bulug Tradition and an even smaller number of sculpture.

Shangpa Kagyu - did not survive as an independent school. The teachings, doctrines and lineages were absorbed into other larger traditions principally the Sakya, Kagyu, Jonang and Gelug Traditions. Jamgon Kongtrul was a modern promoter of the Shangpa Kagyu within the Karma Kagyu Tradition.

Probably the earliest example of art identified with the Shangpa Tradition is a small chapel in the circumambulatory of Shalu Monastery where the lineage of the Kyergangpa Martri is clearly labelled. Other than that small chapel, Shangpa Kagyu subjects can be found in the painting and sculpture of the Gelug, Sakya and Karma Kamtsang Traditions.

Only a small number of paintings have been linked with Shechen Monastery.

Only a small number of paintings have been identified with the Tsarpa Tradition.

A number of early paintings have been identified as belonging to the Taglung Tradition. There also appears to be a large amount of art that is very likely to be Taglung however it can be very difficult to distinguish Taglung art from Drigung art, and sometimes Drugpa Kagyu art. There were also numerous smaller traditions descending from Marpa Kagyu and it is possible that many unidentified Kagyu works belong to those obscure traditions.

Zhije & Cho: these two traditions did not survive as independent schools. The teachings, doctrines and lineages were absorbed into other larger traditions principally the Kagyu, Nyingma and Gelug. 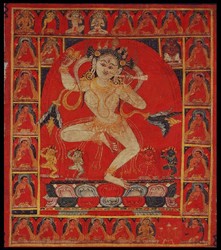 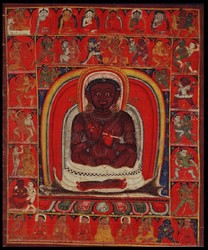 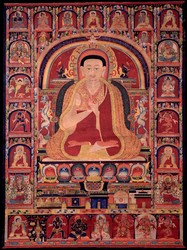