Padmasambhava does have a main or principal iconographic form which is NOT counted as one of the Eight Forms.

According to the Revealed Treasure accounts in the Terma literature he is white in colour with a reddish hue, one face adorned with a moustache and goatee, the right hand holds to the heart an upright gold vajra. The left hand placed in the lap holds a white skullcup filled with nectar, jewels and a long-life vase. The ornate katvanga staff of a Vajrayana mendicant decorated with streamers rests against the left shoulder. Adorned with gold earrings and necklaces, the head is covered with a lotus hat, a gift of the King of Zahor, of silk brocade topped with a half-vajra and a single vulture feather. Attired in various robes of different colours reflecting the disciplines of the Vinaya, Bodhisattva and Mantra Vehicles, he sits atop a sun and moon disc above a lotus blossom rising from the blue waters of Dhanakosha lake. 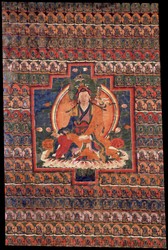 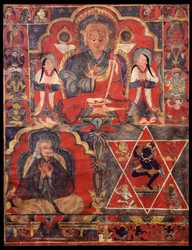 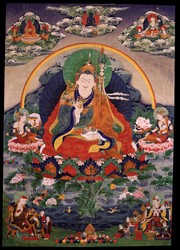 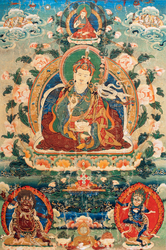