--- The Four Things to Know About Himalayan Art: Painting ---

Himalayan Art can appear to be over whelming when first encountered. It can be filled with all sorts of shapes, colours, patterns and figures. It is difficult for novices to know how to approach or how to engage the art, how to interpret, how to weigh the sacredness or secular nature of the imagery. With some, a tremendous amount of over-thinking can ensue. With others, they might become disinterested or unwilling to commit the effort seemingly required. All of this is understandable when the basics of the 'Four Things to Know' are not committed to memory.

All paintings have some type of recognizable shape or characteristic appearance. It could be the physical dimensions of the painting. It could be the vertical or horizontal format, square or round in general shape. A painting might have patterning, be heavily coloured, architectural, or alternately very simple in design with only one or two basic colours. A painting might have a single figure or multiple figures.

Paintings have three general subjects which determine the three general shapes, which are [1] figurative, [2] narrative and [3] diagrammatic. The figurative shape is characterized by a single large figure or several large figures with many additional smaller secondary figures. Narrative paintings also contain figures but they are generally of a much smaller size and arranged in narrative vignettes, or repeated in a continuous flowing narrative. These narrative scenes are portrayed against either rich or sparse natural and verdant landscape. Diagrammatic subjects include complex circular patterns known as mandala, architectural in nature, along with charts depicting medical procedures, astrological themes, cityscapes, and simple diagrams for magical purpose, protection and wealth generation.

Understanding the three general subjects is first accomplished through shape recognition as described. With the figurative shapes in art, along with the larger and smaller figure subjects of the narrative paintings, they are further understood by knowing the Eleven Appearances (or Eleven Figurative Forms) in Himalayan art.

There are only eleven basic appearance types, The Eleven Figurative Forms, that deities and human figures can take in art. The appearances are: [1] buddha, [2] elder (lohan), [3] king, [4] lay person, [5] monastic person, [6] siddha person, [7] peaceful deity, [8] semi-peaceful deity, [9] wrathful deity, [10] animal featured deity and [11] warrior appearance. All of the different figure types in Himalayan art are subsumed under these eleven types of appearance.

Half or more of all Himalayan style art is created in sets of paintings or sets of sculpture. Sets of objects are very large works of art which tell a much larger story or convey more information than that of a single self-contained one-off object, painting or sculpture. With painting sets they are identified generally through individual compositions separated from the full group of paintings. Over the centuries many sets of paintings have become separated or broken up, some damaged due to fire, water, insects and rodents. A painting that belongs to a set can often be recognized by the shape and disposition of the central subject. Large central figures in a set are often positioned on the canvas to the right or left of the central axis of the composition. This dissonance relates to how the paintings are displayed as a group and reflect the sequencing and the proper reading of one composition to the next in the correct chronological order. The off-set large figure is displayed in a manner where the subject is looking inwards, right or left, towards the central subject, the main painting of the set. Sculpture does not follow this painting rule.

Number Sets are the common and natural groupings of associated Buddhist figures in art. When it comes to understanding the subjects of sets then the most basic Number Sets must be learned and memorized. There are many Number Sets that are communal for all Himalayan Buddhist art and there are many unique number sets that are specific to certain traditions such as the Sakya or Kagyu. There are others that are unique to branch traditions, single monasteries, institutional complexes, or regions. Number sets catalogue and group the most important subjects that are depicted in art.

The most common Number Sets are: the Buddhas of the Three Times, the Three Lords of the World, Four Guardian Kings, Five Direction Buddhas (of a mandala), Six Ornaments & Two Excellent Ones, Eight Medicine Buddhas, Eight Great Bodhisattva, Eight Forms of Padmasambhava, Shakyamuni Buddha & the Sixteen Elders, Twenty-one Taras, Padmasambhava & Twenty-five Disciples, Thirty-five Confession Buddhas and the Eighty-four Mahasiddhas. These are the most common and the most well-known Number Sets and those most commonly found represented in art.

The Buddhas of the Three Times are Dipamkara, Shakyamuni and Maitreya. The Three Lords of the World are the principal bodhisattvas Manjushri, Avalokita and Vajrapani.

Painting sets do not mix between Number Set subjects, meaning, when a number set subject is painted, it is painted fully, including all members of that number set. The Buddhas of the Three Times is a Number Set. They might be painted together in a single composition. That single composition would produce a single painting including a single Number Set of three figures. The Buddhas of the Three Times could be painted as a three-composition painting set with each of the three Buddhas occupying a single canvas. Three Buddhas and three canvases equal a three subject Number Set and a three-painting set. Number sets can be painted on any number of canvases provided all members of the number set are included. Sometimes an additional Number Set might be included as a secondary subject in painting sets with the primary subject being the larger central figures for each canvas and composition. In such a case, the secondary number set might be represented at the top of each composition but with the figure being much smaller in size, or depending on hierarchy it might be depicted at the sides or below.

An example of such a set might be the Buddhas of the Three Times as the central figures in a series of three compositions and the Three Lords of the World represented as smaller figures beneath each of the three Buddhas. The bodhisattvas would be placed below because of the rules of hierarchy. A set of three paintings such as that example would then contain two Number Sets.

Composition means the general layout and structure of the figures and background in a painting. Over the past millennium there have been four principal types of composition used for paintings. They are: [1] overlapping figures, [2] registers, [3] floating figures and [4] repeated figures. These four also follow a chronological order. The first, overlapping figures, is following more of an Indian and Kashmiri style where the secondary figures surrounding a central subject, such as the Buddha, will overlap each other. Portions of their bodies, torso or faces are obscured by other individuals depicted in the crowd of secondary figures. This was popular from approximately 1000 to the 1300s. Then it ended. Following that, from the 14th century onward the common composition style was registers. With this type of composition the central figure and all the side figures are neatly arranged in vertical and horizontal rows, often appearing to be in their own discrete boxes, separated from the other secondary figures. Registers fell out of popular favour in the 16th century.

From approximately the mid 16th century up to the present the central and secondary subjects of a composition were placed against an open landscape, often with a sky background, mountainous middle ground and green verdant foreground. The figures are placed over the landscape, sky and foreground with no regard for realism. This is called floating figure composition. In some cases, a later development of this floating figure composition was to remove the sky and landscape background entirely with only the floating figures remaining. The manner and arrangement of placing secondary figures in a composition is informed by hierarchy which in turn is informed by a general knowledge of the subject, Number Sets and individual religious traditions. Floating composition is the standard composition type used from the 16th century up to the present.

From knowing the four types of composition for paintings then the structure of paintings can be understood. From understanding the general structure then the three primary types of painting style, [1] regional, [2] institutional, [3] and individual artist can be introduced, along with a sense of chronology and some historical context. Individual artist painting styles are primarily a phenomenon from the 16th century to the present.

Pandita style hats are generally worn by monastics and scholars of the Sakya, Jonang and Gelug traditions. Lotus style hats are for the Nyingma tradition, lay and monastic. The fan-like style hat originates with the famous Kagyu teacher Gampopa Sonam Rinchen. It remains popular in one form or another in all the Kagyu traditions. The cap style is a smaller hat that is primarily differentiated from one to the other by colour and decoration. The cap is employed in many schools, to a greater or lesser degree, but was made famous by the black hat of the Karmapa teachers of the Karma Kagyu tradition. Teachers wearing the trademark hat of their personal tradition can appear as a central figure in painting. They especially appear at the top of a composition where the Buddhas and founding teachers are located according to traditional hierarchy. They can also appear as side figures.

The ‘Four Things to Know’ are the four easy entrance doors for approaching Himalayan painting. The subjects, sets, styles and religious traditions are the four key points. 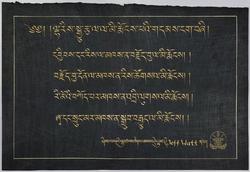