These images below represent compositions of the Eight Great Adepts (mahasiddha), following the Palpung Monastery tradition. Each painting except one has Padmasambhava as the central figure. The iconographic depiction of each of the figures is believed to be based on a model created either by Situ Panchen Chokyi Jungne, or at least at Palpung Monastery in the 18th century.

The nine individual figures can also be found as a three painting set with three mahasiddhas per composition. They can also be found created as a single figure per painting making for a set of nine paintings in total with Padmasambhava as the central painting.

Depictions of the Eight Siddhas are found as minor figures in larger painting compositions as early as the 13th century. However, there has never been a standard system for enumerating the eight. The Sakya, Jonang and Gelug traditions each have their own popular eight siddhas. The various Marpa (Dagpo) Kagyu traditions each have their own list of eight. Eight identifiable siddhas are commonly found depicted in the Eight Great Cemeteries surrounding a painted mandala of the Sakya, Kagyu and Jonang Traditions. The Nyingma and Gelug artistic convention is to depict generic siddha figures in each of the eight cemeteries. See the Eight Siddhas as minor figures in early artworks: Eight Siddhas (misc.) 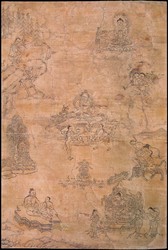 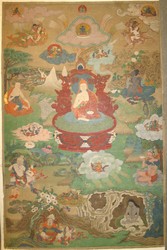 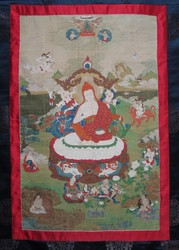