Depending on the context Vajrapani can have either the classification of a bodhisattva or that of a meditational deity and fully enlightened Buddha - it all depends on whether the depiction is based on the Mahayana Sutras or the Tantras of Vajrayana Buddhism.

With the non-iconic forms Vajrapani he can be seated in a variety of postures or he can be standing with the legs straight or with a slight bend to the body and one leg slightly forward or to the side. He will typically hold a vajra scepter in the right hand or have a vajra supported by a flower blossom over his right shoulder. The vajra is the special attribute of Vajrapani. It is also the essential distinguishing characteristic in the recognition of Vajrapani. Sometimes he will also hold a bell in the left hand, or again supported above a flower over the left shoulder. The bell is not a required attribute of Vajrapani which is why it is not always depicted.

The definition of a non-iconic form of Vajrapani is a Peaceful Appearance male figure holding a vajra scepter, green or blue in colour. He can be seated in any posture or standing in any suitably peaceful manner.

The depiction of Vajrapani as a member of the Eight Great Heart Sons is similar to that of a non-iconic form. There are some texts which describe the bodhisattvas in a praise (stotra) to all eight. There are also some lower classification tantras (kriya, charya, yoga) which include the eight and sixteen great bodhisattvas as retinue figures in the mandala descriptions. These descriptions generally follow the standard appearances with Vajrapani as peaceful, green or blue, and holding a vajra.

The Eight Great Heart Sons are often used in art to symbolize the enlightened Mahayana Sangha while the Six Ornaments and Two Excellent Ones of the Southern Continent are used to symbolize the ordinary, worldly, Mahayana Sangha. To represent the tradition of the Theras, Hinayana, in Himalayan art then the group of figures beginning with Shakyamuni Buddha, the two principal disciples, the sixteen elder, two attendants and Four Direction Kings are depicted.

As one of the Three Lords of the World after Manjushri and Lokeshvara, the three are generally depicted as seated according to the kriya tantra mandala description and meditational texts. Manjushri is the main deity of the meditational practice. The Three Lords of the World are related to the three Buddhas of the Kriya Tantra system, Shakyamuni, Amitabha and Akshobhya. The three bodhisattvas are the lords of the three Buddha Families under those three Buddhas. In later Tantric literature a five Buddha system is developed with Vairochana, Akshobhya, Amitabha, Ratnasambhava and Amoghasiddhi as the principal figures. In art, this combination of the Three Lords of the World are depicted as either seated or standing and essentially become removed from their original association with the Kriya Tantra meditational practice. Sometimes Vajrapani is placed at the center of the group of three.

The Sarvadurgati Parishodhana Tantra has a total of eleven or twelve mandalas depending on the tradition. Three of those mandalas depict a peaceful Vajrapani at the center. He is white in colour and holds a vajra and bell, seated in vajra posture. 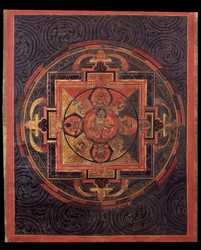 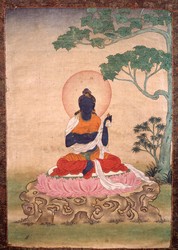 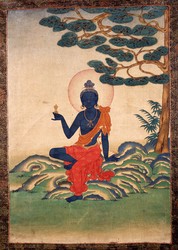 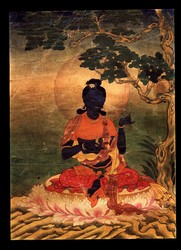 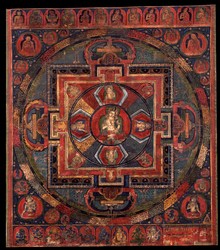 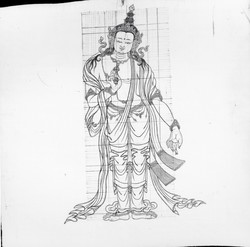 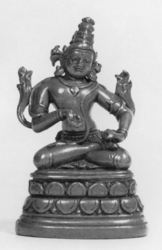 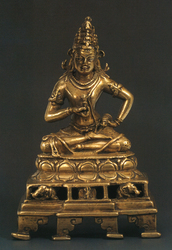 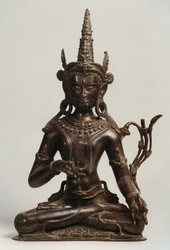 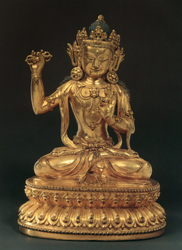 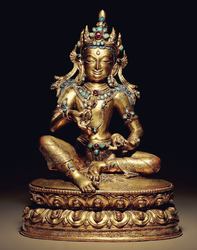