Jeff Watt | HAR: About Us 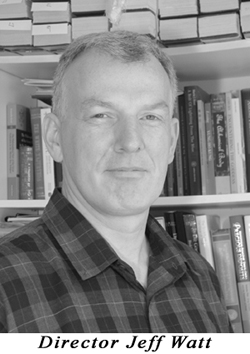 Jeff Watt (Wikipedia), one of the leading scholars of Himalayan art, acquired his prodigious knowledge of Buddhist, Bon and Hindu iconography from a longtime study of Buddhism and Tantra. As a teenager, he studied with Dezhung Rinpoche (Seattle, Wash.) and Sakya Trizin (Dehradun, India), dropping out of school at seventeen to take monastic vows from the 16th Gyalwa Karmapa. For the next eleven years, Watt trained intensively in India, Canada and the U.S., with teachers such as Dudjom Rinpoche, Dilgo Khyentse Rinpoche, Kalu Rinpoche, and Sakya Jetsun Chimey. In 1985 he gave back his monastic ordinations but continued to study and to translate sacred Tibetan and Sanskrit texts, along with completing numerous traditional retreats over years of periodic isolated practice, much of it in the rugged mountains of British Columbia, Canada.

He is the Director and Chief Curator of Himalayan Art Resources (HAR), a website and 'virtual museum' featuring upwards of 100,000 images with detailed descriptions, making it the most comprehensive resource for Himalayan 'style' art and iconography in the world. He has worked on HAR since April 1998 at which time there were 625 images in total (Tibetan paintings only).

As of May 1st 2015, under Watt's leadership HAR established itself as a not-for-profit 501 c 3 registered corporation, Himalayan Art Resources Inc., in the state of Delaware, USA. HAR from the beginning was a project made possible by the Shelley and Donald Rubin Foundation. From 1997 until April 30th 2015 HAR was solely funded by the Rubin Foundation. As of May 1st 2015 the new corporation and its Board of Directors assumed full responsibility of HAR with Watt remaining as the Director and Chief Curator.

Watt was also the founding Curator and leading scholar at the Rubin Museum of Art (RMA) in New York City, from October 1999 until October 2007. The RMA houses one of the largest collections of Himalayan and Tibetan art in North America which is currently the best catalogued. The HAR website has been the primary curatorial tool for cataloguing and mounting all Himalayan exhibitions at the RMA. (See exhibition & publication list below).

During his tenure as Senior Curator at the RMA he built the collection from a personal founder driven collection into a world class museum collection with some of the finest examples of Himalayan Art comparable to the best museums in the world. The Jourdan-Barry Collection was the single largest purchase (2005) with over 72 works of sculpture, many of which are on permanent display at the RMA. (See other examples below).

RMA: How or Why an Object was Acquired