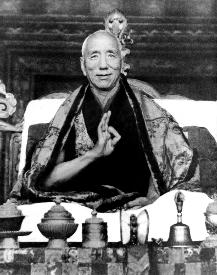 Seven years later, at the age of fifteen, Chokyi Lodro was summoned to Dzongsar Monastery at the behest of Kalsang Dorje (skal bzang rdo rje), Khyentse Wangpo's nephew and trustee. Khyentse Wangpo's 'body' incarnation, who had been installed at Dzongsar, had suddenly passed away, and he was sought as a replacement. Thus Chokyi Lodro again transferred to Dzongsar and was installed as the head of the monastery.

Over the course of his life Dzongsar Khyentse, as he was commonly known, studied with many of his predecessor's most eminent disciples. Regarding the Sakya teachings, Jamyang Loter Wangpo ('jam dbyangs blo gter dbang po) transmitted the Lamdre and Hevajra, and gave him most of the empowerments of Gyude Kundu (rgyud sde kun 'dus), the Compendium of Tantra that he and Khyentse Wangpo had compiled. Dragra Shabdrung Tashi Gyamtso (brag ra zhabs drung bkra shis rgya mtsho) taught him the Mitra Gyatsa (mi tra brgya rtsa), the Ngor Lamdre lineage of Ngagwang Chodrag (ngag dbang chos grags), and the Ra (rwa) and Tsar (tshar) lineages of Vajrabhairava. 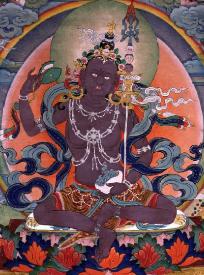 In his twenties Chokyi Lodro followed in Khyentse Wangpo's footsteps, travelling to Ngor Ewam Choden (ngor e waM chos sde), the mother monastery of Dzongsar in Tsang, and used the opportunity to seek instructions from a wide variety of teachers along the way. He elected to take higher monastic ordination in the Nyingma tradition at Mindroling (smin grol gling).

Also in his twenties Chokyi Lodro established a monastic college at Dzongsar, Kham Jematang, (khams byed ma thang), in collaboration with the famous Khenpo Shenpen Chokyi Nangwa (mkhan po gzhan phan chos kyi snang ba) and Onto Khenpo Jamyang Khyenrab (dbon stod mkhan po 'jam dbyang mkhyen rab), and installed a huge Maitreya statue in the five-storey Rigsum Lhakang (rig gsum lha khang). The Khamje college has survived as a center for the rime (ris med), or nonsectarian, ideal that he and his teachers embodied. The college was founded on the site where Khyentse Wangpo had taught in 1871, following a prophesy that he and Choggyur Lingpa received regarding the need for a college there. Chokyi Lodro also founded a retreat center for the college at Rongme Karma Tagtsang (rong me dkar mo stag tshang), a sacred site that Jamyang Khyentse and Choggyur Lingpa opened in the 1860s. He also reformed the monastic college at Katog, revising the curricula and building a Sangdogpalri (zangs dog dpal ri) temple.

In the late 1940s, at the age of fifty-six, Chokyi Lodro married Tsering Choden (tshe ring chos ldan), whom he had met when she was seven and he was a young man. The union was the result of certain prophecies that it would promote his activities and dispel obstructions to his life. There was some criticism when he returned his pratimoksha vows, but it was not extensive. 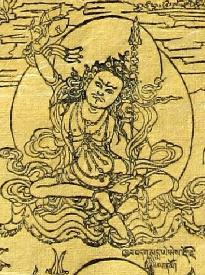 Chokyi Lodro is said to have spent most of his fifties and sixties in retreat, completing the practical accomplishment of the myriad Vajrayana instructions he had received. He nevertheless was able to maintain a prodigious schedule of teaching and writing, giving numerous transmissions of Nyingma, Sakya and Kagyu teachings to disciples of various traditions. He gave the transmission of the entire Dam-ngag Dzo (gdam ngag mdzod) twice, the Drubtab Kundu four times, the Lamdre Tsogshe (lam 'bras tshogs bshad) three times and the Lamdre Lobshe (lam 'bras slob bshad) twice. He further transmitted the Ngor Kyildun (ngor dkyil bdun) four times, the Nyingma Kama (rnying ma bka' ma), three times, and the Rinchen Terdzo once.

In 1952 Chokyi Lodro and Tsering Choden opened the sacred site called Khyungchen Palzong (khyung chen dpal rdzong), on a mountainside above Dzongsar and wrote a description of it. Chokyi Lodro's personal physician, Tsering Puntsog (tshe ring phun tshogs) built a retreat center associated with the practice cave of the site and resided there. Chokyi Lodro himself installed statues of Padmasambhava. The building was destroyed in 1958 with the entire Dzongsar monastic complex. It was rebuilt in 1984.

Khyentse Chokyi Lodro left Dzongsar in 1955 when he saw the signs of the imminent devastation that would engulf Kham, once armed resistance to the Communist occupation was ignited. He spent a year or so of pilgrimage in Tibet before going into exile in Sikkim. He made the chapel of the palace of the king of Sikkim his main temporary residence, and continued to give endless teachings and transmissions to students.

Before passing away, he asked whether Dilgo Khyentse, then known as Trulku Selga (an abbreviation for Rabsel Dawa) had managed to escape from Tibet. Upon hearing that he had, he commented: "In that case, the Nyingma teachings are safe." On that same occasion he predicted that the dharma would flourish again in Tibet, and that it would also spread vastly in the West. He passed away in Sikkim, where his remains are preserved in a small golden stupa, [until recently being moved to the town of Bir in North India]. 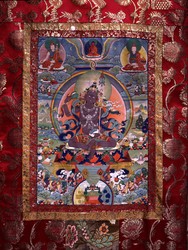 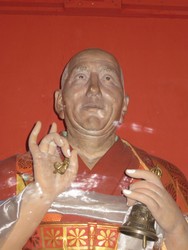