The terms non-iconic and aniconic are used interchangeably in this context.

There is an understood model, or appearance, that has become standardized over the centuries for depicting bodhisattva figures in Himalayan and Tibetan art. The model used is based on classical Indian ideas of aesthetics grounded in the textual ideas of godly/heavenly appearance along with the influence of numerous cultures and artists for over a millennium.

The meaning intended here for non-iconic is simply referring to the forms described as originating out of a Mahayana Buddhist context rather than being textually based in the Tantra literature of Vajrayana Buddhism. Non-iconic means iconographically non-Tantric. These bodhisattva forms, especially the standing figures, were not intended as meditational deities but rather as objects placed on a personal shrine or in a temple to serve as a devotional focal point, or commissioned with the wish for accumulating merit.

The principal bodhisattvas, Manjushri, Avalokiteshvara and Vajrapani have also also developed over time unique non-tantric sitting postures. The 'thinking posture' is associated with Lokeshvara. The 'relaxed posture' is found with Manjushri, Lokeshvara, Maitreya and the god Indra.

The female deity Tara, while not a true bodhisattva, does have bodhisattva appearance when depicted in her peaceful forms. When Tara is depicted in a standing posture she is very similar to the other bodhisattvas discussed above.

The seated posture of royal ease with the right leg pendant can be common for all of the Eight Great Bodhisattvas as well as for their tantric meditational forms and the many other popular tantric deities such as Tara, Marichi, Kurukulla and Vasudhara. 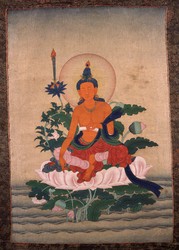 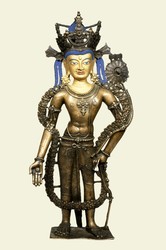 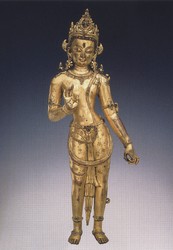 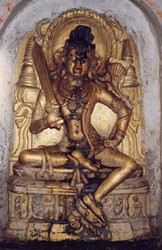