In the Tibetan Lunar Calendar the full moon falls on the 15th day and the new moon on the 30th day. Occasionally there are discrepancies when calculating between the lunar calendar and the western solar calendar. In the lunar calendar this is rectified by adding additional days or dropping days from the calendar month as needed, or every few years by adding an additional 13th month into the year. By counting forward or backward from the full moon day the correct Tibetan Lunar day is calculated.

(The *Kshitigarbha Sutra is the source text).

The following is an extract from In the Presence of My Enemies: Memoirs of Tibetan Nobleman Tsipon Shuguba.

"It is difficult to work out an exact corollary between the Tibetan calendar and the one used in the West. First, our lunar year consists of twelve thirty-day months -- which adds up to three hundred and sixty days -- so an extra month is added every third year and may be inserted any place among the twelve which is considered auspicious for that particular year. The next difficulty arises because the real lunar year has only three hundred and fifty-four days so a certain number of days must be left out each year. There are squares on our calendars with no number but only the word chod, meaning "cut off." That day for that particular year no longer exists. Also, in order to avoid an unlucky day, an auspicious date may happen twice. That particular date repeated in two consecutive squares will be offset by chods elsewhere in the year.

Toward the end of each year a new calendar is worked out by the state astrologers. Consequently, no one knows what the next year will contain until it has almost started. Therefore, it is often difficult to plan festivals accurately, as the dates -- particularly for the New Year's Festival -- are not known much in advance. The Monlam Festival usually occurs somewhere during mid-February to mid-March on the Western calendar. Our months are numbered instead of having names, but the days of the week are named after the planets as in the West.

Our calendar has always been based, since the ancient days of King Gesar and perhaps before, on a great twelve-year cycle. Each year is named after an animal: mouse, ox, tiger, hare, dragon, snake, horse, sheep, monkey, bird, dog, and pig. In the eleventh century, a sixty-year cycle was introduced by combining the names of the animals with the five elements: wood, fire, earth, iron, and water.

Our new year begins officially as Losar with the rising of the new moon March or February, depending on when and where the extra month has been added that year. Monlam begins on the third or fourth day of the new year, depending on whether or not there was a missing day at the beginning of the year. This festival celebrates Buddha Sakyamuni's triumph over the evil spirits who tempted him during his meditations." --- Tsipon Shuguba 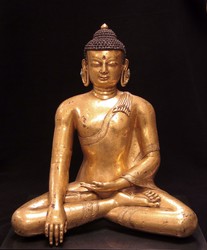