Copper Coloured Mountain: Padmasambhava is associated with a geographic location, like a pureland or heaven, known as the Copper Coloured Mountain. The real uniqueness of Copper Coloured Mountain paintings are found with the groups of deities and lineage teachers that immediately accompany Padmasambhava, in front and at the sides, located on the ground floor. These figures are not at all consistent from composition to composition. The surrounding figures change and are substituted depending first on the particular Nyingma sub-lineage relating to the donor of the religious work of art and secondly to the training and preferences of the artist.

Dorje Drolo: wrathful emanation of Padmasambhava, most often associated with the set of Eight Main Manifestations and the life story of Guru Rinpoche. He also functions as a guruyoga practice/meditational deity with at least fourteen different 'terma' traditions.

Four Deathless Ones (Chime Yabse Shi): belonging to the Treasure tradition of Dorje Lingpa, this 'terma' was discovered in Bhutan and in practiced in both the Bon and Buddhist religions. The male deity has three faces and six hands embracing a consort. The male figure and central face represents Drenpa Namka and the two side faces represent Tsewang Rigdzin and Yungdrung Tongdrol (Padmasambhava) - the two sons. The consort is the wife and mother of the two boys (side faces). Four distinct identities and personalities are depicted in the one image. This is very unusual in Buddhist or Bon iconography where usually one, or possibly two entities are depicted (yab-yum). In many cases with con-joined tantric figures the two represent the opposites and the coming together of opposites not necessarily two separate distinct beings with personalities and self identities.

Loden Chogse: in the appearance of a king, most often associated with the set of Eight Main Manifestations and the life story of Guru Rinpoche.

Lotus Hat: the Lotus hat made famous and modeled after the hat of Padmasambhava. This hat is similar to the pandita hat in basic shape but without the lappets. The lotus hat sides are folded up. It is multi-coloured and ornate with ribbons and a half vajra ornament at the top, or adorned with one or three vulture feathers. Some hats also have a bird feather above the vajra. This is the principal hat of the Nyingma tradition and can be worn by either monks or lay teachers. There are many varieties of Lotus hat, some small and some very large with greater or lesser ornamentation depending on the particular Nyingma tradition. The Payul branch of Nyingma has a unique Lotus hat identified by long lappets that hang down over the shoulders.

Nyima Oser: Nyima Oser is typically depicted in Mahasiddha Appearance, dishevelled, wearing a loin cloth, bone ornaments and carrying tantric implements. He is often portrayed against a background of cemetery scenes, corpses and wild animals. This portion of Padmasambhava's life occurred shortly after he left the kingdom of Oddiyana. The Eight Forms of Padmasambhava are commonly created as painting and sculpture sets, or as murals in a temple setting.

Orgyan Dorje Chang: in the appearance of a peaceful deity similar to Vajradhara with consort, most often associated with the set of Eight Main Manifestations and the life story of Guru Rinpoche.

Padmasambhava (Tibetan: pe ma jung ne. English: Lotus Born): also known as Guru Rinpoche (Precious Teacher). Along with Trisong Detsen and Shantarakshita, Padmasambhava is considered one of the principal early teachers to bring Buddhism to Tibet in the 8th century, Padmasambhava has numerous forms representing outer, inner and secret aspects of his spiritual being. He is also known by many different names which generally follow chronologically his life story. Aside from Trisong Detsen and Shantarakshita, the most important figures to interact with Padmasambhava were his principle Tibetan consort Yeshe Tsogyal and the principal Twenty-five Disciples. There are various Padmasambhava Number Sets which help to organize the important topics and essential subjects of his life and chronological sequence of important events, along with grouping the various sub-sets of important disciples. An 18th century curiosity is the inclusion of Padmasambhava as one of the pre-incarnations in the line of Panchen Lamas.

Pema Gyalpo: in the appearance of a king, most often associated with the set of Eight Main Manifestations and the life story of Guru Rinpoche. He is depicted in King Appearance.

Pema Jungne: one of the eight forms of Padmasambhava representing a specific narrative from the life story. He is depicted as an Indian monk wearing a scholars hat (pandita),

Refuge Field (Longchen Nyingtig): Padmasambhava and consort are the central figures in the composition. Seated above are the lineage teachers. At the lower front are the Buddhas. At the left are the transcendent followers (Sanskrit: sangha) - the bodhisattvas. At the right are the Shravaka followers. The sacred books representing the Dharma, Buddhist teachings, are stacked behind the central figures. Meditational deities and protectors are below encircling the Buddhas. Additional protector deities are often depicted at the bottom of the painting.

Revealed Treasure: a concept originating in Tibetan and Himalayan Buddhism with the Nyingma Tradition. It is a belief that Padmasambhava and a few of his principal disciples concealed both religious teachings and sacred objects throughout the Himalayas and Tibet to be discovered by future generations when necessary.

Samye Chokor Ling: Samye Monastery, established in approximately 775, was founded by the Tibetan King Trisong Detsen, the Indian Abbot Shantarakshita, who ordained the first seven novice monks in Tibet, and with the additional help of Padmasambhava.

Second Buddha: In the Tibetan Buddhist world there are several notable individuals that are referred to as the 'Second Buddha of this Age' following after the historical Shakyamuni Buddha and not to be confused with the idea of 'the future buddha' Maitreya. The term 'second buddha' is not a technical term or official in any Buddhist lexicons. The term can be used for any number of individuals, famous teachers, or as a personal term of respect for any humble or beloved personal teacher. The term can be used in a similar way to the very common Tibetan word 'rinpoche' which means 'precious one.' Both terms are used as an epithet only.

Sengge Dradog: Sengge Dradog is one of the eight forms of Padmasambhava and represents a specific narrative from the life story. He is typically blue in colour, wrathful in appearance with one face and two arms. The right hand holds a gold vajra sceptre. The left hand performs a wrathful gesture. In a standing posture he can have either the right or left leg straight while standing atop a lotus and surrounded by the flames of pristine awareness.

Shakya Sengge: one of the eight forms of Padmasambhava representing a specific narrative from the life story. He is depicted in Buddha Appearance.

Tagtsang Cave: For the purpose of subduing daemons and spirits of Tibet and the surrounding Himalayan regions Padmasambhava, at the thirteen mountain retreats each known as the Tiger's Den, appeared as the wrathful Dorje Drolo. At many of these locations Guru Rinpoche left impressions of his feet in the rocks which is indicated by the black footprints on four of the rock outcroppings surrounding Dorje Drolo. The most famous and well known of these caves is located in Bhutan. The Eight Manifestations of Padmasambhava belong to the tradition of the Revealed Treasures of the Nyingma Tradition of Tibetan Buddhism (Tib.: ter ma).

Trisong Detsen: King Tri Song Detsen (740-798): the Tibetan King that firmly established Buddhism in Tibet, believed to be an emanation of the bodhisattva Manjushri, having invited the Abbot Shantirakshita and Padmasambhava from India, and built the first monastery - Samye Chokor Ling. His typical attributes are a wisdom sword and book supported atop two lotus blossoms at each shoulder.

Twenty-five Disciples: considered the most important of the disciples of Padmasambhava. There are a number of different lists that have appeared over the centuries.

Vulture Feather Adorned Hats: The vulture feather decoration at the peak of a lotus hat appears to have originated with the iconography of Padmasambhava sometime during or after the lifetime of Nyangral Nyima Ozer. A lotus hat can be adorned by one or three vulture feathers, a half vajra scepter, or left unadorned. The symbolic use of the feather seems to be almost exclusively used in the Nyingma Tradition of Tibetan Buddhism. A single feather is generally the norm but examples of three feathers both in painting and sculpture can be found for Padmasambhava and others. Godemchen (1337-1409 [P5254]) typically has three feathers protruding upwards at the crown of the hat. The feather itself is said to symbolize the realization of the highest philosophical view within Buddhism.

Yeshe Tsogyal: the principal Tibetan consort of Padmasambhava. She is also included among the Twenty-five Disciples. 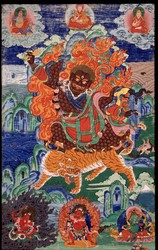 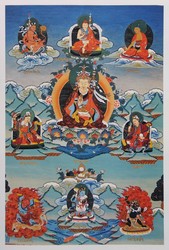 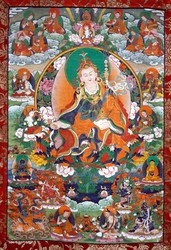 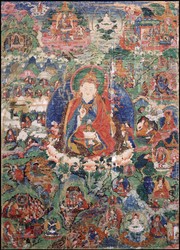