Sets of Paintings account for at least half or more of all Himalayan and Tibetan painted compositions making sets a unique feature of Himalayan Art. Sets can be divided between four major subject types: [1] Life Story, [2] Teaching Lineages, [3] Incarnation Lineages, and [4] Miscellaneous Subjects. This last group can be divided into three subsets: [4a] Mytho-historical Teachers, [4b] Deity Sets and [4c] Miscellaneous Subjects (medical sets, astrology, historical, etc.).
Amoghapasha: this five painting set depicts various forms of Amoghapasha in the top registers of each painting while the majority of the composition is given over to the written text of the Amoghapasha Dharani.

Arhats (with Shakyamuni Buddha): the most common painting set found in Himalayan art. Almost all Buddhist temples had a set of Buddha and Arhat paintings. The smallest set would have three paintings and the largest set would typically contain twenty-three paintings rather than twenty-five. Shariputra and Maudgalyayana would be placed in the center painting with the Buddha. All other figures would be in an individual composition.

Avadana Stories (Shakyamuni Buddha): these stories tell of the previous lives of the Buddha and his disciples. There are several source texts and the stories can be depicted differently depending on the text and the style of painting. The larger sets would have more than twenty paintings.

Bardo Deities: depictions of the peaceful and wrathful deities according to the 'Revealed Treasure' Teachings of the Nyingma Tradition of Tibetan Buddhism and the Bon Religion of Tibet and the Himalayas. Generally the sets are made up of between three and five paintings.

Blue Beryl Medical Paintings: a series of paintings depicting each chapter of the medical treatise of Desi Sanggye Gyatso. In later painting sets some chapters were condensed and several might appear in a single composition making it very difficult to gauge the size of miscellaneous paintings and the total numbers of compositions in a given set. Originally there were over eighty paintings depicting the Blue Beryl text.

Bodhisattvas, Eight; the Eight Heart Sons of Shakyamuni Buddha. The largest set should have nine paintings.

Choga Chunyi (Twelve Ritual Deities, Bon): based on the life story of Tonpa Shenrab the Choga Chunyi are twelve different forms of the teacher representing different periods and challenges in his life. This set would be twelve paintings in total. The Bon were not as concerned as the Buddhists about having a single central painting for purposes of symmetry.

Chogyal Pagpa Life Story: a series of paintings with changing central figures but a continuous narrative of the life story of Chogyal Pagpa in the background vignettes - more than seven paintings.

Dalai Lama Incarnations: the most famous set depicting the incarnation line of Dalai Lamas is the Nartang Monastery set carved as wood blocks and then printed on cloth or paper. These prints are found throughout Tibet, China and Mongolia. They are also made as textile sets in Hanzhou, China.

Drugpa Kagyu Lineage: depictions of the chronological lineage of teachers deemed most important in the Drugpa Tradition of Tibetan Buddhism.

Five Buddhas: the five Tantric or symbolic Buddhas, generally created in relation to the Charya and Yoga Tantras of Mahavairochana, Tattvasamgraha or the Sarva Durgati Parishodhana.

Golden Dharmas, Thirteen: special practices of the Sakya Tradition collected into a group of thirteen. The sets can vary in size depending how many figures are in a single composition. It is common to have three figures per composition.

Gyalwa Shen Drug (Bon): six different forms of Tonpa Shenrab as he appears to the beings in the six realms of existence. This is a set of six paintings.

Jataka Stories (Shakyamuni Buddha):the previous lives of Shakyamuni Buddha. There are thirty-four common stories and over one hundred in the expanded version. Many of the stories have animals as the central character.

Karma Kagyu Lineage: depictions of the chronological lineage of teachers deemed most important in the Karma Kagyu Tradition of Tibetan Buddhism.

Karmapa Incarnations: the successive incarnations of the head lama of the Karma Kagyu Tradition.

Kings, Four Great: the Four Kings (Chatur Maharaja) are part of the Shakyamuni and Sixteen Great Arhat set of paintings. They are rarely if ever painting separately. They do however appear as murals at the entrance way to Buddhist temples.

Lama Gongdu Terma Cycle: depictions of the main deities of an early Nyingma 'Revealed Treasure' Tradition system of practice. The known sets appear to be of Karma Kagyu creation and likely associated with Palpung Monastery of Kham, Tibet.

Longdol Lama Incarnations: the successive incarnations of Longdol Lama Ngagwang Lobzang (1719-1794) of the Gelug Tradition of Tibetan Buddhism. There are a number of interesting previous incarnations in this reincarnation line. A seven painting set.

Mahakala, Chaturbhuja: depictions of all of the deities in the mandala of Chaturbhuja. The known sets belong to the Drugpa Kagyu Tradition. Over forty paintings in the set.

Mahasiddha, Eight: as a distinct group of figures the Eight Siddhas were written about by Dolpopa and later painted at Palpung Monastery. The largest configuration of paintings is a composition of nine.

Mahasiddha, Eighty-four: there are two main systems of Eighty-four Mahasiddhas that are commonly found in art. The smallest set of paintings is three and the largest appears to be eleven paintings.

Manjushri Bodhisattva Life Story: a series of seven paintings depicting the journey of Manjushri along the bodhisattva path. There is a complete set of seven in the Palace Museum, Beijing.

Margapala Lineage (Sakya Lamdre): depictions of the chronological lineage of teachers deemed most important in the lineage of the Lamdre (Margapala) of the Sakya Tradition of Tibetan Buddhism. There is no set number of paintings as the lineage is always growing and there are so many different composition configurations.

Merit Sets: The function of Merit Painting Sets is to generate merit for the person commissioning or sponsoring the creation of the paintings. Merit Sets often have a Buddha or deity figure at the center of the composition. The composition is then copied again and again until there are three, five, seven or more paintings, either identical or nearly identical to each other.

Milarepa Life Story: there are a number of different ways to depict the life story based on the number of paintings so far catalogued as Milarepa life stories. The largest set coming from a Drugpa Kagyu composition is nineteen paintings in size. There are three versions of the Drugpa composition known to exist.

Mitra Gyatsa Deity & Mandala Sets: a collection of one hundred and eight meditation practices together with mandalas compiled by Mitra Yogin in the 12th/13th century.

Ornaments, Six (with Two Excellent Ones): a group of Indian Buddhist teachers considered the most important of the early writers. They are either found in a five or nine painting composition.

Padmasambhava Life Story: there are several different written versions and methods to depict the life story. The Eight Forms of Padmasambhava with a central Padmasambhava figure is the most common however there are larger sets.

Padmasambhava (Eight Forms Abbreviated): these eight forms represent different periods in the life of Padmasambhava and different challenges to be overcome. There are also systems of twelve and sixteen forms. The eight forms are typically depicted in a nine painting set with life story narrative vignettes surrounding the central figure.

Panchen Lama Incarnation Set: the most famous set of paintings depicting the incarnation line of the Panchen Lamas is the Nartang Monastery set carved as wood blocks and then printed on cloth or paper. These prints are found everywhere in Tibet, China and Mongolia.

Panchen Lama 3rd, Lobsang Palden Yeshe (1738-1780): an unusual set of paintings taking the Nartang composition as the center piece and then adding further paintings highlighting the life of the 3rd Panchen Lama. There are at least five paintings in the set.

Protector Deities of the Gelug Tradition: a set of seven or nine paintings depicting the meditational deity Vajrabhairava at the center of the configuration and the most important Gelug protectors at either side; Shadbhuja Mahakala, Magzor Gyalmo, etc.

Rahula, 'Revealed Treasure' Protector: Rahula is sometimes depicted as a central figure with nine stacked heads and four hands accompanied by four retinue figure each with two hands. This composition of Rahula is a five painting set.

Rechung Nyengyu Lineage & Deities: a system of practices coming down from Rechungpa, student of Milarepa. There are likely to be more than fifteen paintings in the complete set.

Sadhanasamucchaya: depictions of each of the more than one hundred and forty deities contained in the Sadhanasamucchaya (English: Ocean of Methods. Tibetan: drub tab gya tso) a compendium of initiation and meditation practices. The largest set of paintings appears to be approximately seventeen paintings in size. There are also versions of this painting set that incorporate the Nartang Gyatsa set of meditational deities.

Shakyamuni Buddha Life Story: also known as the twelve deeds, the main events in the life of the Buddha, these deeds were standardized into a set number of compositions and then carved as wood blocks for easy print making and duplication. The Dege Parkang wood block set is probably the most famous.

Shambhala Kings: depictions of the twenty-five Kings of Shambhala (plus extra). There are two principal styles of depiction, Royal and Deity. The largest sets depict a single king per painted composition. Over thirty-three paintings per set.

Stupas, Eight Great: the eight stupas are often depicted in a single composition however sometimes they are created as an eight painting set.

Tai Situ Incarnations: the successive incarnations of the Situ Lamas of the Karma Kagyu Tradition.

Tangtong Gyalpo Life Story: the life story of Tangtong Gyalpo was painted as murals at the main monastery of the Chagzam 'Tangtong Gyalpo' Tradition of the Shangpa Kagyu. At least one set of five 'tangka' paintings is also known to exist. Also in this set all of the narrative vignettes are numbered suggesting there may be a text describing the creation of a Tangtong Gyalpo set of paintings.

Tara (Eight): depictions of Tara protecting from the eight fears as elucidated in the early Avalokiteshvara and Amoghapasha literature. When done as a full set this is typically a nine painting composition.

Taranata Incarnations: the successive incarnations of an important teacher of the Jonang Tradition of Tibetan Buddhism.

Three Hundred Icons: a set of deities, teachers and protectors organized into a group of three hundred later to be carved as wood blocks for print making and also painted.

Tibet, History of: a set of paintings depicting the standard Buddhist version of Tibetan religious history beginning with the monkey and the rock ogress. This set contains a large number of cityscape images.

Tsongkapa Life Story: there are several versions of Tsongkapa's life story. The most famous version was collated by Jamyang Shepa in the early 18th century and shaped into a fifteen painting set later to be carved as wood blocks for print making and also painted. This fifteen painting set is the most common.

Tsongkapa (Five Forms): based on the famous visions of Kedrub Geleg Pal Zangpo. This is a five painting set although it is more common to find all five forms depicted in one composition.

Twenty-seven Deities (Palpung): the most important meditational deities from the tradition of Marpa Chokyi Lodro. It is unclear if it is a twenty-seven painting set or if the various deities are contained in a smaller number of compositions.

Twenty-five Disciples of Padmasambhava: with Padmasambhava as the center painting generally there are two additional paintings depicting the disciples. A three painting set.

Vajravali (Mandalas & Deities): taken from a compendium of mandala initiation rituals written by Abhayakaragupta in the 11th century this set of paintings can number anywhere from twenty-eight, forty-two or forty-five depending on how they are calculated. The mandalas images are often condensed into four per painted composition.

White Beryl Astrological Paintings: a series of paintings depicting each chapter of the astrological treatise of Desi Sanggye Gyatso. 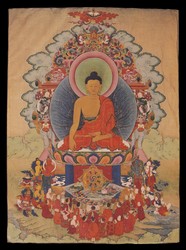