There are always many questions about animals and how they relate to different deities and symbol sets. This Animal Relationships Guide is a simple list intended to make the more common relationships clear.

Antelope: Milarepa Story, see chapter 26 in the One Hundred Thousand Songs of Milarepa for this story.

Bat: a white bat can be found in the retinue of the Bon and Naxi deity Werma Nyinya. Interesting bat-like wings can be found with retinue figures in the entourage of Vaishravana Riding a Lion from the Yuan Period.

Bear: the consort of the protector Begtse named 'Goddess of Life' rides a bear. Kshetrapala the fiercest of the five retinue attendants of Shadbhuja Mahakala rides on the back of a crazy bear.

Bee: Lamlha, the Bon religion goddess of travellers, rides atop a golden bee.

Boar: Vajravarahi, Varaha, Marichi, Purba Drugse Chempa and Bhudeva/devi (Medicine Buddha retinue). Wrathful Padma Shavari of the Treasure Tradition stands atop a nine faced boar. All of these deities either have a boar face, ride on a boar or stand on a boar supported throne.

Buffalo: Vajrabhairava, Krishna Yamari, Rakta Yamari, Jataka Stories, Yama Dharmaraja. The deities listed here either have a buffalo face or stand on a buffalo. In the Jataka Stories there is at least one moral tale involving a buffalo.

Camel: The Queen of Winter from the Shri Devi Magzor Gyalmo retinue rides atop a camel. Black camels are often depicted in Mongolian 'kangdze' offering paintings.

Cow: The Siddha Goraksha is a cow herder and the Krishna Avatar of Vishnu is associated with cows and Gopi girls. Several sculptural works attributed to Choying Dorje, 10th Karmapa, have a Lokeshvara figure seated on a cow.

Crow: most forms of Mahakala are accompanied by crows or ravens. Kakamukha Mahakala has a crow head. The Nyingma protector deity Rahula also has a crow or raven at the very top of the nine stacked heads. Marichi in one painting is depicted with a sun marked with a three-legged rooster (crow).

Deer: Wheel of Dharma, Avalokiteshvara, Maitreya, Amoghapasha, Jataka Stories, Shavaripa. The Buddhist Wheel of Dharma is usually accompanied on either side by kneeling deer. The listed bodhisattvas and deities each wear a deer skin (krishnasara) across the left shoulder. Shavaripa from the Eighty-four Mahasiddhas is depicted as a deer hunter. There are numerous tales involving deer in the Jataka Stories.

Dog: the mahasiddha Kukkuripa is known as the 'dog person'. Tsiu Marpo, a Tibetan worldly God, is almost always accompanied by a red dog. Most Mahakalas are also accompanied by black dogs.

Donkey: Chakrasamvara in one form has a donkey head as does Hevajra. Shri Devi rides atop a donkey.

Dragon: White Jambhala rides on a dragon as does one of the Tseringma Sisters. The dragon is depicted on Prayer Flags. The Drugpa Kagyu Buddhist Tradition is named after the dragon as is the country of Bhutan.

Elephant: Four Harmonious Friends. Akshobhya Buddha sits on an elephant supported throne. Tara (eight fears) protects from rampaging elephants. Ganapati/Ganesha has an elephant head. Shadbhuja Mahakala stands atop an elephant as does one of the forms of Bhutadamara Vajrapani of the Charya Tantras. In the Chinese tradition the bodhisattva Samantabhadra rides atop an elephant.

Fish: The Matsya Avatar of the Hindu God Vishnu is in the form of a fish. Tilopa often depicted holding a fish in the left hand. Luipa is typically shown holding and eating fish entrails. Minapa, one of the eighty-four mahasiddhas according to the system of Abhayadatta, is depicted standing on a a large fish. In the Eight Auspicious Symbols Set are a pair of two fish.

Garuda: Vishnu has Garuda as his mount, vehicle, companion. Garuda, half man and half bird is a deity in Tantric Buddhism. Nagas are often clutched in the talons or beaks of Garuda birds. He is also represented at the top of the Torana (throne back).

Goat: Dorje Legpa in some forms rides atop a goat rather thana lion. Damchen Garwa Nagpo always rides on a goat.

Goose: Brahma, Chandra (moon), Sarasvati. All of these deities have the goose as a mount. In early torana depictions, throne back, the goose is a common symbol.

Horse: Prayer Flag. Hayagriva has either one or three horse heads atop his own. Kinnara, Ratnasambhava sits atop a horse supported throne. A rare form of Hevajra has a horse head. Marichi in some forms rides atop a horse. Bernagchen Mahakala and consort ride atop a black horse. Several Jataka Stories involve horses. Surya (Sun) as a deity rides in a chariot drawn by horses.

Kirtimukha: the throne back (torana) for many Buddhist deities can depict either a kirtimukha or a garuda bird.

Lion (or Snow Lion): there are three general ways in which the examples below relate to a lion (1) seated atop a lion supported throne, (2) having a lion face, or (3) riding atop a lion. Durga rides or stands atop a lion. Shakyamuni Buddha sits atop a lion supported throne as does Vairochana Buddha. Tara (eight fears) protects from lions. Simhanada Avalokiteshvara and Manjushri ride atop a lion. Simhamukha has a lion face as does the 2nd retinue attendant for Shri Devi Magzor Gyalmo. In the retinue of Bernagchen Mahakala are Shingkyong and his consort - both have a lion face. The Hindu God Vishnu in his form as Narasimha Avatar is half man and half lion. Pehar Gyalpo, Dorje Legpa, Tseringma, Vaishravana and Dorje Shugden all ride atop a snow lion.

Monkey: Ganapati/Ganesha, Bernagchen Mahakala and Tsiu Marpo can all have monkeys as attendant figures. There are several Jataka Stories about monkeys.

Naga (also see Snake): Nagaraja Buddha, Simhanada, Garuda, Manasa, Nagarjuna. Many wrathful deities wear the Eight Great Naga Kings as decorations, such as for bracelets, anklets, belt, etc. Each are named and have a specific colour described in the literature.

Peacock: Amitabha/Amitayus, Manjushri, Kumara/Karttikeya, Mahamayuri. All of these figures except for Mahamayuri sit on a peacock, or peacock throne. Mahamayuri holds peacock feathers. The Siddha Shavaripa often wears a peacock cloak. On some temple rooftops two peacocks are depicted on either side of a cone-like structure.

Pig: Marichi either has a pig face (faces) or is in a chariot drawn by pigs, or sits on a pig, sow, or boar. (She occasionally rides on a horse).

Rabbit: The Dalai Lama in a previous incarnation was a rabbit. There are several Jataka Stories about Shakyamuni Buddha in previous lives being born as a rabbit.

Rat: Ganapati/Ganesha rides atop a rat or has a rat as an attendant figure.

Raven: Kakamukha Mahakala has a raven face. The Bhutanese Royal Crown has a raven head on the top and Sakya Tridzin Wangdu Nyingpo is sometimes depicted wearing a wrathful raven hat.

Rooster: Dorje Setrap. The Dragyab Monastery of Eastern Tibet maintains Dorje Setrab as their special protector. The place is also filled with chickens and roosters which are believed to be associated with Dorje Setrab. Marichi in one painting is depicted with a sun marked with a three-legged rooster (crow).

Sheep: Trailokyavashamkara Lokeshvara. This form of Avalokiteshvara stands on two sheep. He is rarely depicted in art.

Snakes (also see Naga): Manasa has a hood of several snakes and often holds a snake. Janguli, Tara (eight fears) protects against snake bite. Nagaraja Buddha has a hood of snakes above the head as does the Indian Buddhist scholar Nagarjuna. Many wrathful deities wear the Eight Great Naga Kings as decorations, such as for bracelets, anklets, belt, etc. Each are named and have a specific colour described in the literature.

Snow Lion (see Lion): Prayer Flag. Tseringma, chief of the five long-life sisters rides atop a snow lion as does Dorje Legpa and the Gelug version of Dorje Shugden.

Swan: sometimes confused for the goose (hamsa) which is the mount of Brahma and Sarasvati.

Tiger: Prayer Flag. Both Dorje Drolo a form of Padmasambhava and the mahasiddha Dombi Heruka stand or ride atop pregnant tiger. Tsongkapa in his guise as a siddha rides atop a tiger. The form of Mahakala called Vyaghra-vahana stands on the back of a tiger. The attendant to the Sixteen Arhats, Dharmatala, is accompanied by a tiger. Generally male wrathful deities wear a tiger skin skirt. A Gelug motif depicts a Mongolian man leading a tiger with an iron chain.

Tortoise, or Turtle : Manjushri, Kurma Avatar, Sidpaho Charts, Siddha Kurmapada. Associated with astrology as is Manjushri, the tortoise, or turtle, appears in some paintings and repousse depicting Manjushri and as a central figure in the Sidpaho. Of the Ten Avatars of Vishnu one was a tortoise. Kurmapada is an Indian siddha from the tradition of Chakrasamvara.

Vulture: Padmasambhava, Dorje Lingpa, Rigdzin Pema Chogyal and Godemchen each adorn their hats with vulture feathers. Vultures also play a role in the sky burial ritual and represent the five families of Dakini.

Wolf: The son of the protector deity Begtse, 'Lord of Life', rides a wolf as his mount. Some forms of Ekajati in the Revealed Treasure Tradition hold a wolf in the left hand.

Yak: Prayer Flag. He appears as one of the original five animals on the Prayer Flag. The yak is also a mount for several indigenous Tibetan worldly gods. 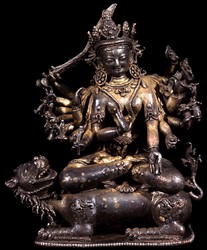 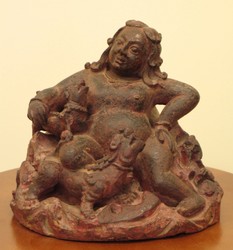 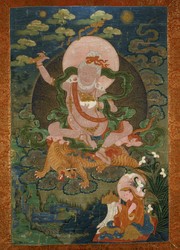 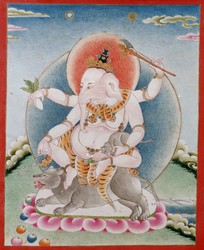 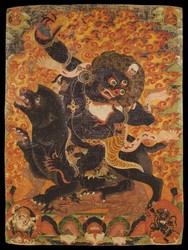